Another very fruitful month with rapid ongoing BANANO community growth is over. Apart from more streamlined free and fair BANANO distribution, June brought us the Dogecoin airdrop which has finally been wrapped up, and we’ve introduced you to Camo BANANO — BANANO’s privacy layer!

Here’s now the BANANO Monthly Update July 2019 including a brief recap about what happened in June 2019, and also some more general introduction and information for all the new BANANO community members.

For those of you who don’t know BANANO yet: BANANO is a cryptocurrency (like Bitcoin, just a much newer generation). BANANO was forked from the cryptocurrency Nano in April 2018 and thus is powered by DAG technology — here to distrupt the meme economy. Yes, BANANO has memes! And also feeless and near-instant transactions, a highly active community, and active technical development! The BANANO community doesn’t take themselves too seriously, but we’re here for the long run and we enjoy what we do.

On top of this, BANANO is super easy to use. Just try our slick mobile wallet called Kalium and get your first free $BANANO from one of our faucets within minutes! Also, BANANO has a free ongoing distribution through innovative faucet games. You can find more details on our official website: banano.cc, and you’ll find help getting started at banano.how.

BANANO is already traded on several exchanges and not listed on CMC yet, however you’ll find current information collated at Coingecko. Despite our increased ongoing distribution the BANANO price has been pretty stable mostly between $0.0013 and $0.0018 within June 2019:

In terms of distribution, we have meanwhile four faucets running permanently — which is a huge improvement compared to earlier times. A short overview:

Crane Faucet
Play captchas to get Banano. A variety of captchas that suit every player

This one had nothing to do with distribution, but still it it surely is relevant and interesting enough to mention it again: We’ve finally announced Phase 1 of ‘Camo BANANO’ — BANANO’s privacy layer. While for now accounting for confidential and not fully private transactions yet, Camo BANANO will be further developed. Phase 2 of Camo BANANO requires adding a new block type to the BANANO protocol, finally allowing for sum-of-squares private transactions. Keep posted for further updates, and read more here in the full announcement.

June 2019 was another fruitful month in terms of driving BANANO free distribution forward. As mentioned above, we have several constantly running faucets and on top of this several other fun Faucet Games running regularly!

Within June 2019, we’ve distributed a total of ~48 Million BANANO (last month: ~35M)! Just to name the major events, this has happened through faucet payouts (Bananominer, Banano Powerplant, Monkeytalks, Crane Faucet, Meme Faucet, Black Monkey), tipping allowances and celery (rewards) to all core team members, major contributors and moderators (total ~70 people), and of course two airdrops: The BANANO airdrop to Dogecoin holders, and the BANANO airdrop to NANO holders (tx) which is still ongoing. The biggest portion within June with about 15 M BANANO total payout was distributed through our Faucet Game ‘Black Monkey’.

Tipbots as we have them at Discord, Reddit, Telegram and Twitter are instrumental for showing newly joining members how easy-to-use and fast BANANO truly is, and to actually have everyone use BANANO for what it’s made for — tipping others.

In total, since the Tipbot was started in Mid April 2019, more than 3.8 Million BANANO with a total current value of $6449 were tipped in more than 40,000 transactions, only at Twitter and Telegram!

Community activity on all platforms is key for BANANO growth and ripening! To keep track of this, here’s the monthly overview about our main social media channels with follower counts as of July 1st, 2019 compared to counts from June and January 2019 (as far as available, some channels were created more recently):

Telegram is easy to use and very popular, and thus the perfect place to easily help new community members getting started with BANANO, in their language. That’s why we are opening more and more channels in all major languages, and our Telegram Tipbot enables us to send all new members some BANANO right away through a near-instant, feeless on-chain transaction, seeing is believing!

Here are current follower counts of all official BANANO Telegram Groups for July 1st, 2019 compared to counts from June and January 2019 (as far as available, some groups were created just recently and we’re searching for suitable moderators):

If you want to use the BANANO TipBot in your Telegram group, just add it to the group, make it admin, and start using it!

Generally, make sure you join suitable groups, help others, and spread the word about BANANO! All this is just the beginning ❤
Any group missing? Interested in helping out as moderator? Send a message to @bantano#1919 at our Discord or comment below!

BANANO is also expanding its community at Facebook, here’s an overview of our current groups:

The core team and all the BANANO community supporters are constantly working on different new projects adding up to the BANANO ecosphere.

Previously mentioned things being still on the list include the BANANO Yellowpaper release and a proper BitcoinTalk announcement. We can’t provide exact ETAs for those and some other cool stuff still being in the pipeline (such as CAMO BANANO Phase 2, new faucets, real-world airdrops and new potential platforms using BANANO), but we can assure you we’re working on those and also new exchange listings as much as possible and will get them done one after each other. We’re all here for the long-term!

Stay tuned, and whenever you have an idea and/or ability to contribute to the BANANO ecosphere whatsoever feel free to contact us!

How can YOU help?

BANANO is merely what its community makes out of it ❤

If you want to help spreading the word and increasing our community, join our channels and suitable groups, follow our accounts, like and share/retweet our posts, and help others getting started!

At this occasion: A huge hug and thank you to all our supporters, contributors, moderators, giveaway creators, BANANO tippers, and meme creators at all the different $BANANO social media channels for doing a really really awesome job ❤ Keep it up!

Any group/language missing? Interested in helping out as moderator at Telegram or Facebook? Any idea to develop or contribute to the BANANO ecosphere otherwise? Contact @bantano#1919 at our Discord, or leave a comment below for questions or suggestions. 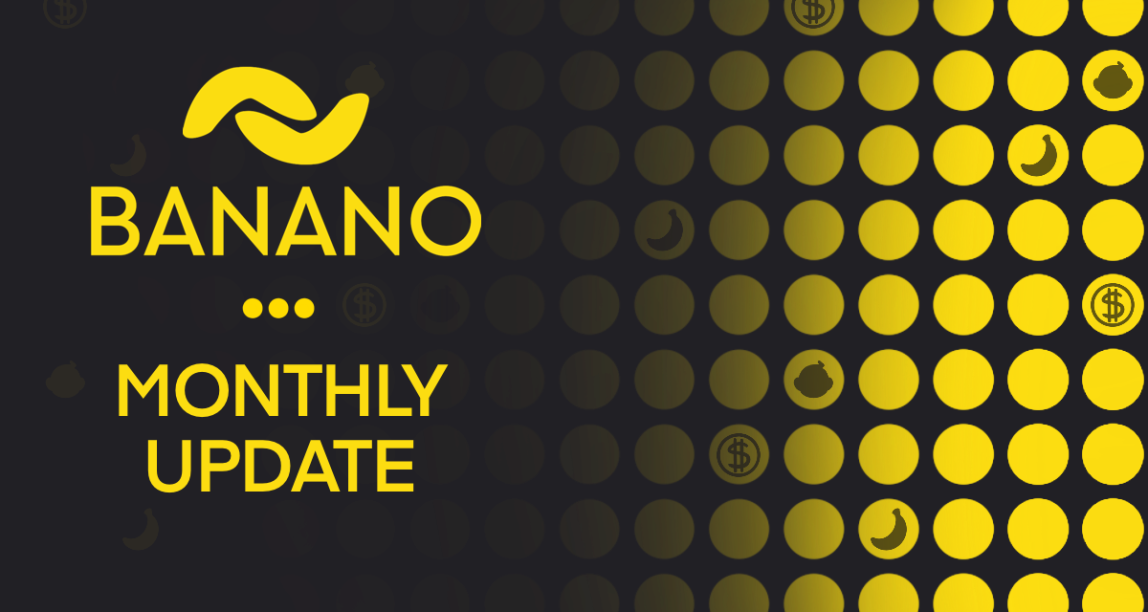 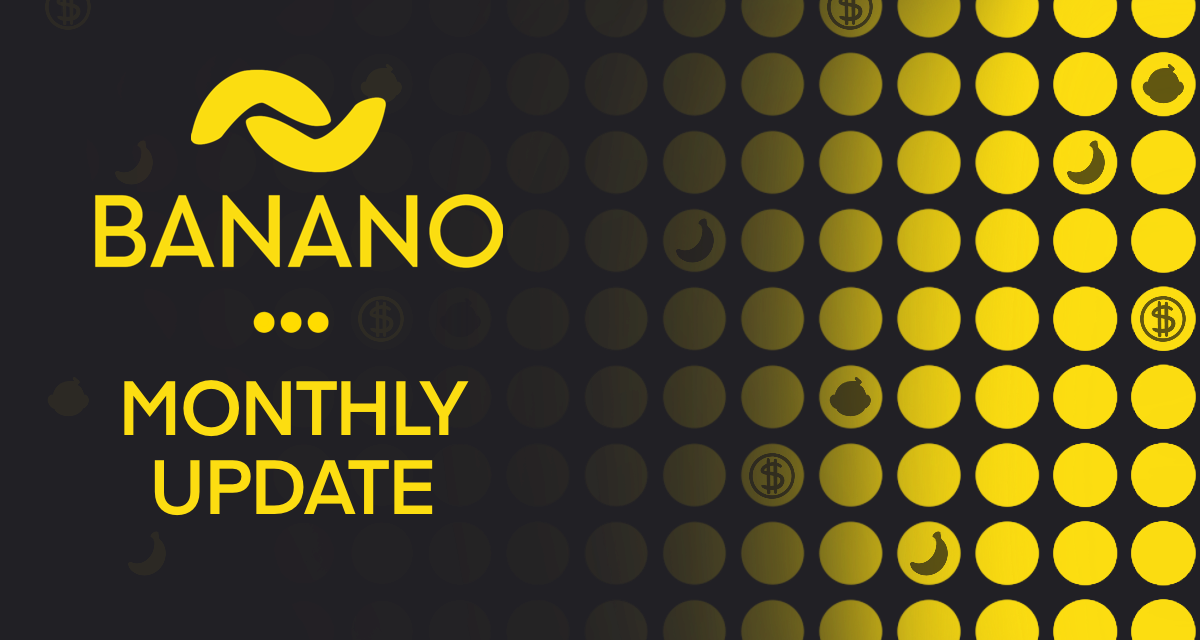 It’s time for another fresh Monthly Update from the BANANO ecosystem! The idea of those monthly updates is to keep our community informed… 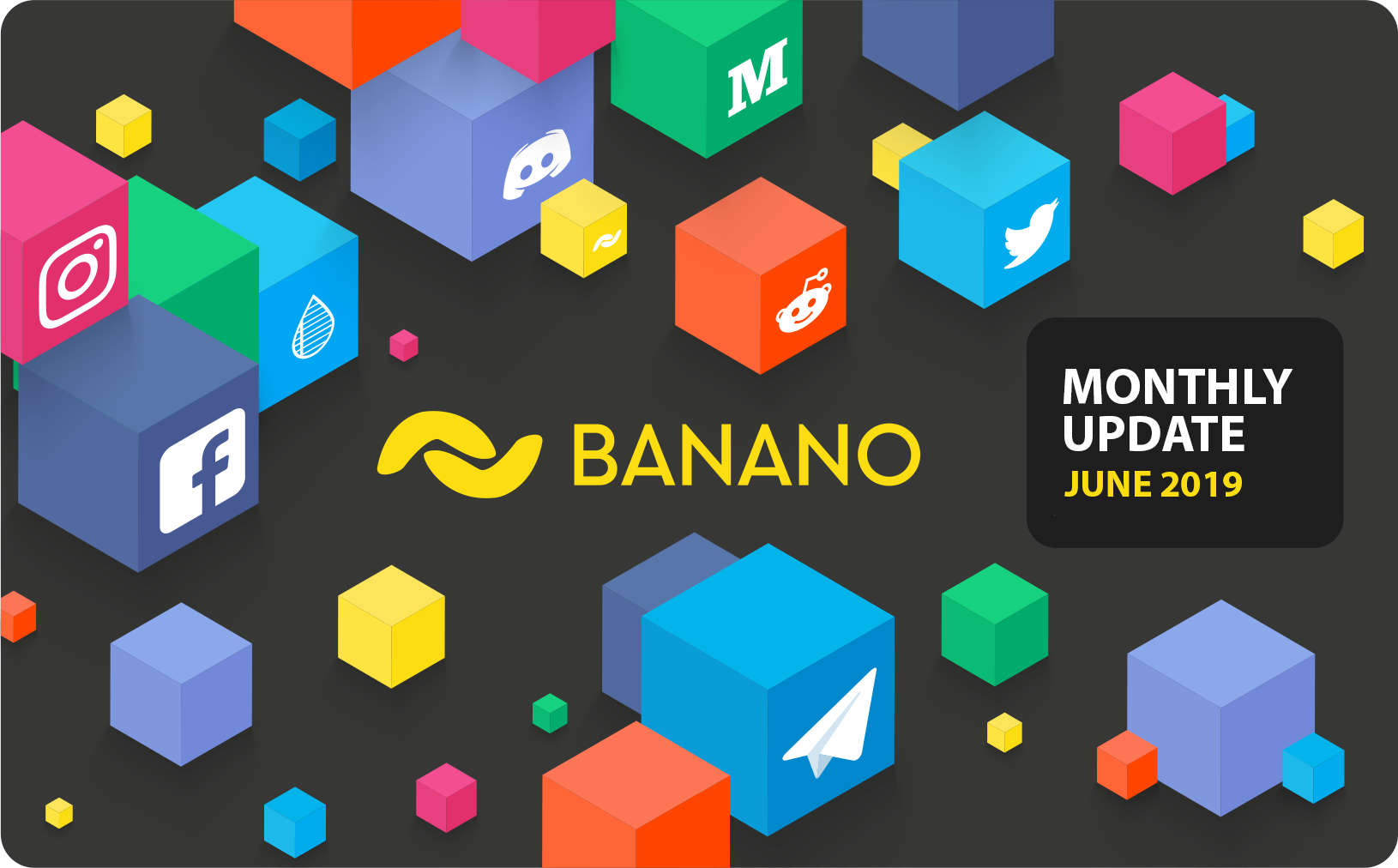 Welcome to another monthly BANANO update! A lot has happened, and since the BANANO community is growing rapidly this update will include…